In 2018 the City of Albert Lea solicited proposals for engineering services to evaluate the need for a new water tower following the demolition of the Central Water Tower. From this study it was determined that a replacement 1 million gallon water tower was needed.

September 30, 2022: With the fabrication phase complete for the Central Water Tower, Newton Avenue is back open to traffic from Clark to Fountain Street. There may be occasional street closings as the painters start work on the dry area of the interior, where water is not stored. Click here for more information of the project. 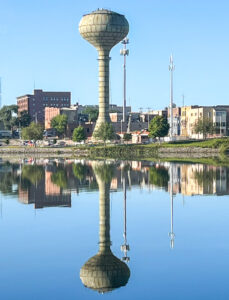 August 26, 2022: Crews placed the final pieces of the new water tower on Friday. Coming next will be 5 coats of paint to the interior and exterior. When finished, the tower will hold 1 million gallons of water and weigh more than 9 million pounds. It’s made up of 400-plus pieces of steel and will stand 18 stories tall, which is 4 stories taller than the original built in 1938. 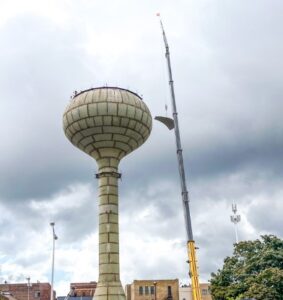 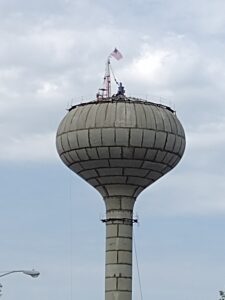 August 19, 2022: The next steps include bringing in a larger crane to lift the remote-controlled crane from the top and placing the final roof pieces. After completing the fabrication, the crews will apply 5 coats of paint to the interior and exterior of the tower, along with constructing a controls building inside the tower. Be sure to check out the amazing drone footage of the construction, taken by Albert Lea Fire Rescue, on the city website.

August 5, 2022:  Welding of the roof continued this week. Monday, August 8th they plan to start installing the roof sections.

July 29, 2022: Welding of the roof occured this week, the roof is scheduled to be installed next week. 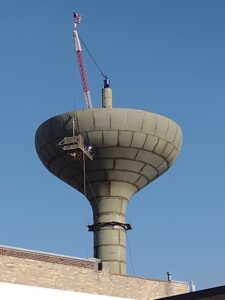 July 15, 2022: The contractor is welding the third row of floor shell plates above transition plates and welding roof pates on ground level. 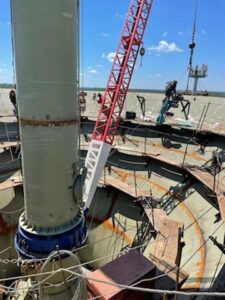 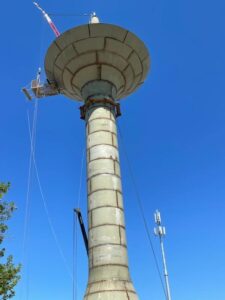 July 8, 2022: The heavy rains earlier this week caused minor setbacks but the crew continued hoisting sections and welding into place.

June 30, 2022: Assembly of the tower continues but the wind has caused slower progression. The contractor is still planning to bring in the painting crew this fall to wash, sand blast and begin the 4 layers of paint and epoxy.

June 24, 2022: Work continues of the bowl segment of the tower. This portion of the work is expected to last throughout the summer.

June 17, 2022: The contractor continued welding and grinding the joints on the pieces that were raised last week.

June 10, 2022: Two barrel sections were installed this week along with joint welding of those pieces. 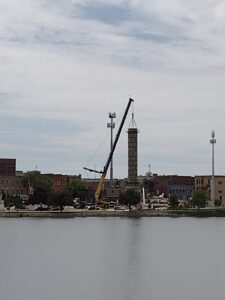 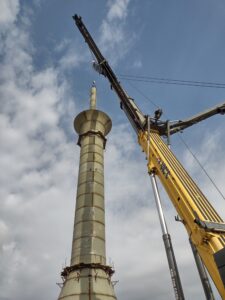 June 3, 2022: Fabrication of the new water tower on Fountain Street is 25 percent complete. Crews cannot weld in certain rainy conditions, but they continue to make progress. The first part of the stem is completely done and ready to be hoisted into place. The second part of the stem is 90 percent done. Crews have started fabricating the bottom part of the bowl. The contractor expects to move in a larger crane in June 13 to hoist the stems and bottom part of the bowl into place. Then fabrication of the upper bowl will take place on the ground. The installation of the upper cone is not scheduled to begin the week of June 6th.

May 20, 2022: The crew continued on welding the pedestal in preparation for installation of the upper cone that is scheduled to begin the week of June 20th.

May 13, 2022: The welding crew has the first floor and ladder welded in the lower cone. The piping coming through the cement floor of the tower is being installed as well, there will be an insulated mechanical room with electrical and valving in this location. There is one more cone transition that will go on top of the pedestal, after that a much larger crane will be onsite to place the steel pieces.  The crew is also busy finishing the welds on the pedestal sections on the ground in prep for the crane. 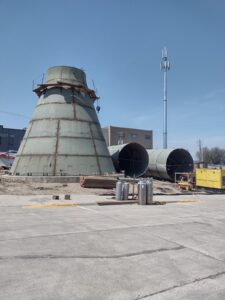 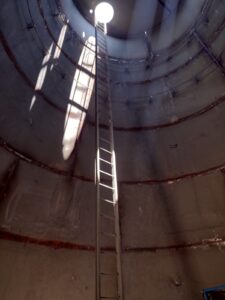 May 6, 2022: The central water tower construction is moving along according to schedule. Crews are hoping for no rain and wind, along with warmer temperatures, to keep construction on time. Fabrication is expected to continue through fall.

They have started adding on the barrel section of the tower. Crews are welding on the inside as well as the outside. The crews outside weld the next section to be lifted into place by the crane, and are limited on how much they can weld on the ground due to the weight of the steel and capacity of the crane.

Newton Avenue will remain closed to through traffic while construction is ongoing.

April 8, 2022: Phoenix Fabricators began welding pieces in place on the new water tower last week. The tank construction will use 425.71 tons of steel.

December 3, 2021: Site preparation work continued this week including removal of the parking lot pavement. The contractor is tentatively scheduled to begin driving the pile foundation the week of December 13th.

November 19, 2021: The demolition contractor has mostly completed their work. The only work remaining for the demolition contract are minor punch list items. The contractor, Pheonix Fabricators, constructing the new tower plans to begin next week with removing some of the existing parking lot and other site preparation work.

November 12, 2021: The majority of the old tower has been removed; the contractor is currently working on removing the footings. The contractor for the new tower plans to start next week with removing the pavement in the parking lot and some site preparation.

October 14, 2021: The contractor is currently removing the bottom of the tank, and this will continue into next week. Work has been somewhat slowed from their original schedule due to equipment problems and weather. They believe they will have the remainder of the tower removed by the end of next week.

A preconstruction meeting was held this week to discuss the new water tower construction. The contractor’s current plan is to mobilize in as soon as the demolition contractor has completed their work. They will install the footings this fall, and then return in the spring to begin constructing the new tower.

October 8, 2021: By the end of this week the tank sidewalls will be removed. Next week they will begin removing the bottom of the tank and then the support and main center pillars.

October 1, 2021: The contractor began work this week. They are currently cutting the top of the tank into pieces, letting them fall into the bowl, and removing them with a crane. Next week they will be closing portions of Newton Avenue and Fountain Street so they can set the crane in the street to better allow their work to continue.

September 24, 2021: The demolition contractor plans to begin removing the existing water tower next week. This project is expected to take two weeks and will be accomplished by torch-cutting the steel tower into manageable pieces starting at the top, lowering them to the ground with a crane and hauling them away. During the removal process, the adjacent sidewalk will be closed, and temporary road closures and detours will be required on an as needed basis.

September 17, 2021: A preconstruction meeting was held this week to discuss the project. The demolition contractor, U.S. SiteWork Inc., plans to begin removing the existing tower on September 27th, with work expected to take two to three weeks depending on the weather. Their process will be to torch-cut the steel into manageable sized pieces and hauling them away, starting at the top of the tower.