The Early Settlement of Albert Lea 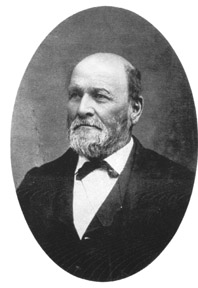 In 1835, Companies B, H, and I of the United States Dragoons, under the command of Lieutenant-Colonel Stephen W. Kearney, came through Freeborn County. One of the members of the expedition was Lieutenant Albert Miller Lea, topographer. Lieutenant Lea sketched the outline of the lake that he named “Fox Lake”. Joseph Nicollet later renamed the lake, Lake Albert Lea. In 1855, a small settlement began on the northwest edge of the lake and the town became known as Albert Lea, named after the lake—which was named in honor of Lieutenant Albert Lea.

“The first settler on the present site of Albert Lea was Lorenzo Merry, who, coming here in June, 1855, built a cabin on the…corner of Washington and Water streets.” (Tribune, p. 11) George Ruble came to the area in July 1855, to find a mill site. Ruble built a log home near the proposed dam and mill site. When the dam was constructed at the east end of the slough area, a body of water was created. It was later named Fountain Lake. (Heritage, p.37) The beginnings of a prosperous little village were appearing. In 1856, a stage line commenced running through Albert Lea. (Neill, p.364) The first store established…was that of Julius Clark, who coming west from Ohio in the spring of 1856, was persuaded by Mr. Ruble to establish his business in the pioneer community. (Tribune, p.11)

The beginning of 1857 found six buildings in the village. The Ruble house was at 522 Bridge Street, and his mill was at the foot of Fountain Lake. The Thorne house was on Park Avenue, between Grove and Fountain streets. An empty building, erected as a store, later was used as a schoolhouse…; Clark’s store was at 119 East Clark Street, and Merry’s house was at the southeast corner of Washington and Water streets. (Curtiss-Wedge, p. 252)

Albert Lea village was platted by Charles C. Colby and recorded on the 29th of October 1856, in Dodge County… On the 24th of February, 1859, it was recorded in the Register’s office of this [Freeborn] county…(Neill, p. 360) …the Original Plat included about 36 square blocks along Washington Avenue, Broadway, and Newton Avenue. In laying out the town plat, one square block was designated for the future site of a courthouse, one square block was designated for a City Park (Central Park) and property along Spring Lake was designated for a college site. No college ever materialized at that site which later became College Addition. (Heritage, p. 37)

The first term of public school began in December 1857 in a small log building. Martin V. Kellar, a pupil in this school, reflected with the following account:

“…three small windows furnished the light, for seats three long slabs from Ruble’s mill were made into benches without backs; a wide slab resting on substantial wooden pegs in the north wall was the only desk; an old fashioned box stove, was all of our furniture. No bell sent forth its pleasant notes announcing that Albert Lea had a school, for the only bell yet heard in this county was on the old brindle cow. School was called by vigorous pounding on the window with a book or slate…. Our most serious problem was the scarcity…in books.” (Curtiss-Wedge, p. 146-147)

“Until May 11, 1858, the village had no local government, but at that time the citizens of Albert Lea township perfected a town government for the village of Albert Lea, electing a village board of supervisors with Dr. A. C. Wedge as chairman. With the growth of the village, however, problems were encountered…” (Tribune, p.11) The need for local city government became apparent.

“In the winter of 1878, the city charter was granted by the State Legislature… Having been accepted by a vote of the people, on the 12th day of May, 1878, the city government was organized, the first officers being: Mayor, Frank Hall; Board of Aldermen, W. P. Sergeant, President, J. W. Smith, R. E. Johnson, John F. Anderson, and E. D. Porter, two from each ward; Clerk, Fred S. Lincoln.” (Neill, p. 371)

According to the federal census of 1860, the population of Albert Lea village and township was 262. By 1880, the city of Albert Lea’s population was 1,966 individuals. From a modest beginning, Albert Lea grew into a flourishing village.

For more information about Albert Lea, the city and the Lieutenant, please visit the Freeborn County Historical Museum or its website https://www.freeborncountyhistory.org