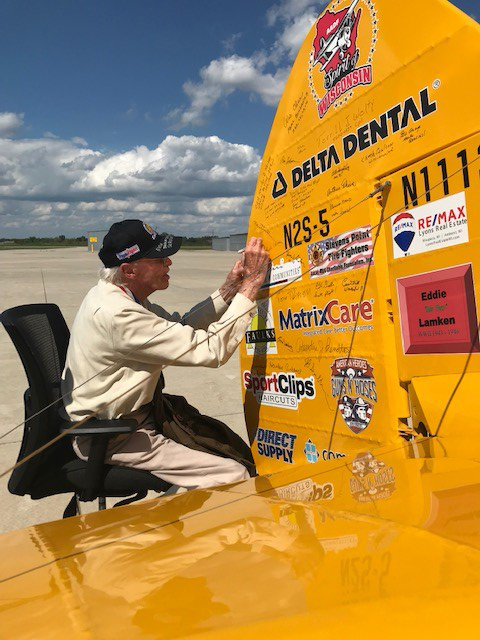 Sgt. Richard Crumb autographs the tail of one of the the DreamFlight Stearman aircraft

A WW II open-cockpit biplane dropped into Albert Lea Airport on short notice Aug. 31. Though WW II aircraft are increasingly rare, this wasn’t unusual. What WAS unusual is that it made a special trip to give a ride to WW ll veteran Richard Crumb. The WW II trainer is one of 6 belonging to Dream Flights – a charity covering the entire United States, a historic national effort to locate and honor WW II veterans. As part of Operation September Freedom, the charity is giving free flights in the biplanes to 1000 veterans. DreamFlights.org.

Richard Crumb is one of those veterans. With the exception of his time in the Army, he has spent his life in the area – residing in the house he was born in, about 20 miles NW of Albert Lea. His son, “Dick” Crumb, saw an advertisement for the special recognition on social media, and though the deadline for applications was in June, decided to put in an application for Richard. Everything fell into place – there were illnesses, deaths, and cancellations, and a spot opened up. One of the aircraft was going from Hutchinson, MN to LeMars, Iowa and Albert Lea was nearly on the way. The dispatcher for Dream Flights called Albert Lea Airport Manager Jim Hanson to advise of the event on 3 hours notice! There wasn’t time to draw a crowd, but Sgt. Richard Crumb was going to get his ride – at age 97!

One of the things they teach in the military is “Never be late for a troop movement” and Sgt. Crumb and Dick Crumb made sure that they were at the airport early. To give Sgt. Crumb the recognition he deserved, Hanson called the American Legion, who sent out Legion Riders Bill Koza and Duane Thomas to represent the Veteran’s organization. Precisely on time, the aircraft appeared overhead, and Sgt. Crumb excitedly watched the landing.

After introductions were made all around, the pilot asked Sgt. Crumb if he was ready for his ride – and he eagerly accepted! It was a bit difficult to get up on the lower wing of the biplane, and swing the leg up and into the deep cockpit, but he managed. Asked if there was anyplace special he wanted to go, Sgt. Crumb said “Anyplace is fine with me, I just want a ride!” After photos and well wishes, the

airplane was started – the Legion members rendered a crisp salute (Crumb remarked “that’s the first time someone has saluted ME!-a sergeant’ – the aircraft taxied to the end of the runway, and they were OFF – not reappearing until 20 minutes later. After landing, Crumb was asked “how did you like your ride?” He replied “I didn’t know there were so many lakes around here – it’s beautiful!”

After deplaning, the pilots presented Sgt. Crumb with a commemorative cap, which he wore with his WW II “Eisenhower Jacket” (which still fits!). The pilots have every WW II veteran they fly autograph the aircraft, and Crumb “signed in.” Commemorative posters were given to Crumb, his family, and the airport.

Crumb answered many questions about his military service afterward. He served in France, Belgium, and Germany.

ABOUT THE STEARMAN AIRPLANE
The Stearman was designed as a training aircraft. Pilots initially flew low-powered aircraft, then “graduated” to the higher-performing Stearman to learn aerobatic maneuvers – then on to Advanced Trainers – and eventually to combat aircraft. The Stearman was renowned as being especially strong, to withstand the stress of aerobatic flight – and the 220 horsepower radial engine prepared students for higher horsepower aircraft. It is popular with fans of antique aircraft today.. 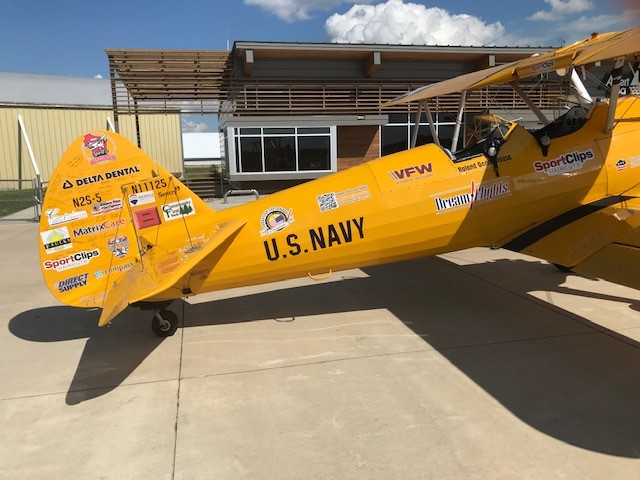 Stearman biplanes have a Minnesota connection. During WWII, future President George Bush learned to fly and soloed a Stearman at South St. Paul – in Minnesota – in the winter time! That airplane survives today and is on display at Flying Cloud Airport in Minneapolis. 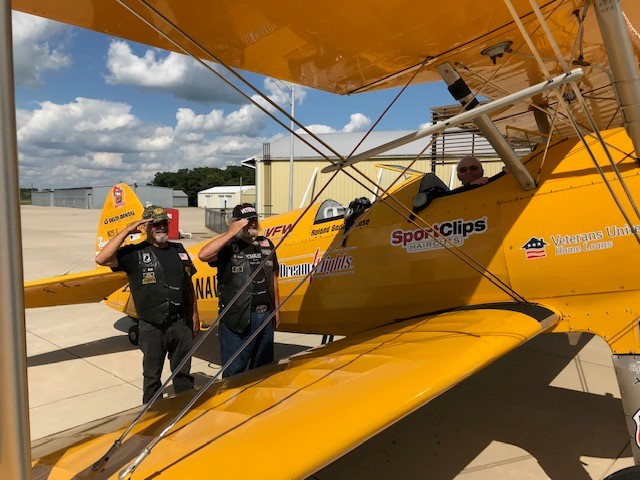 Sgt. Crumb is a member of the New Richland, MN. American Legion.  Author Jim Hanson asked the Albert Lea Legion if they could send a representative, and they sent two Legion Riders on VERY short notice!  Sgt. Crumb remarked, “that’s the first time that I’ve been saluted—I was only a Sergeant!” 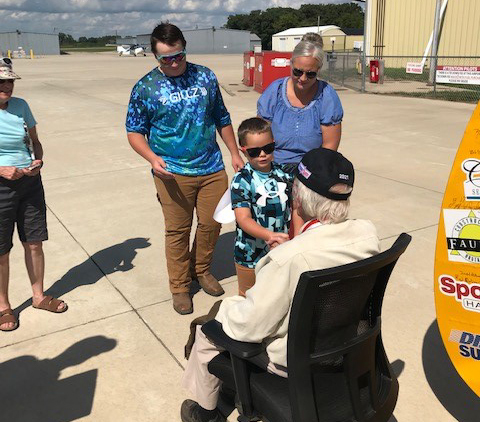 “Young and old”—this young man’s family was driving by the airport, and saw the airplane.  After watching, he  wanted to meet a “real soldier”