Jacobson Building in downtown Albert Lea: Preserving history, one piece at a time 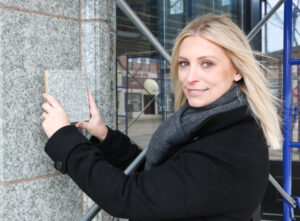 Megan Boeck, city planner for Albert Lea, compares a color sample for replicating terra cotta pieces to repair the Jacobson Building. Boeck wrote the application for a Minnesota Historical Society grant that resulted in $276,500 in funding for the repairs.

The front of the Jacobson Building in downtown Albert Lea is like a rare piece of art, with terra cotta pieces forming ornate designs of flowers, faces and other motifs. But this façade is cracking and breaking loose in places, with falling pieces posing a threat to pedestrians below.

The City of Albert Lea will repair the façade this year with the help of a grant from the Minnesota Historical Society, which will provide half the cost of the repairs, up to $276,500. The Albert Lea City Council voted Feb. 14 to accept the low bid of $301,500 from  Advanced Masonry Restoration of St. Paul, Minn., for the project.

“Restoring the integrity of this prominent building will not only eliminate a public safety hazard but will also support the city’s downtown revitalization efforts,” said Megan Boeck, city planner for Albert Lea.

At four stories in height and 22 feet wide, the front of the Jacobson Building at 211 S. Broadway Ave. totals only 1,000 square feet. But it’s the terra cotta exterior that makes it rare. Only two companies in the United States, one on each coast, still make such terra cotta pieces. The building, named for a long-time owner, is also on the National Register of Historic Places.

The Jacobson Building in downtown Albert Lea will undergo repairs over the next years to restore its rare terra cotta front, funded in a large part by a Minnesota Historical Society grant.

The Jacobson Building will be a complicated, time-consuming and expensive repair project, according to the City Inspection Department.

The city considered replacing the façade with a fiberglass or brick exterior, but rejected them because they cost more than replicating and repairing the terra cotta pieces.

Even demolition would cost more than the repairs, especially because tearing down the Jacobson Building would also require extensive changes to the next-door Freeborn Bank building, a literal cornerstone of Albert Lea’s downtown. The two buildings share an entry, lobby, internal stairway and elevator (non-functioning). Without these two buildings, Albert Lea would no longer boast the largest intact historic district in Minnesota.

“Every building has a value down here. It’s not a dollar figure. It’s what that building can do for the community,” said Tom Staker, vice-chair of the city’s Heritage Preservation Commission. He and his wife Tami Staker own and operate a toy and gift store downtown called Whimzy.

If one did put a dollar figure on the value of historic buildings, Staker would estimate $4-$5 spent in the community for every $1 spent on a building. Staker attests to the increased business downtown in recent years, with 40-45 percent of his customers now coming from outside Minnesota.

In early 2018, city workers were removing holiday decorations from streetlights and noticed a piece of terra cotta hanging by a string of caulk from the Jacobson Building. They snagged the piece to prevent it from falling and potentially injuring pedestrians below. The city took a closer look at the façade and realized more pieces were at risk of coming loose. With a coffee shop renting the first floor, the city put up scaffolding to catch any falling pieces while allowing access for the business. And that proved to a be a good move because more pieces have since fallen off the building.

Many of the joints between the terra cotta tiles are eroded, allowing water to penetrate the façade. Water penetration has in turn affected the steel elements that anchor and support the terra cotta tiles, causing the tiles to crack. In addition, steel window supports on the third and fourth floors have corroded, increasing the risk of more damage.

The repair will take time and precision. The contractor will tap each terra cotta piece with mallet in a process called “sounding” to detect cracks not yet visible to the human eye. The tiles will then be removed for inspection with a microscope to verify the cracks. Cracked pieces will be “stitched” together with tiny pins and re-glazed. 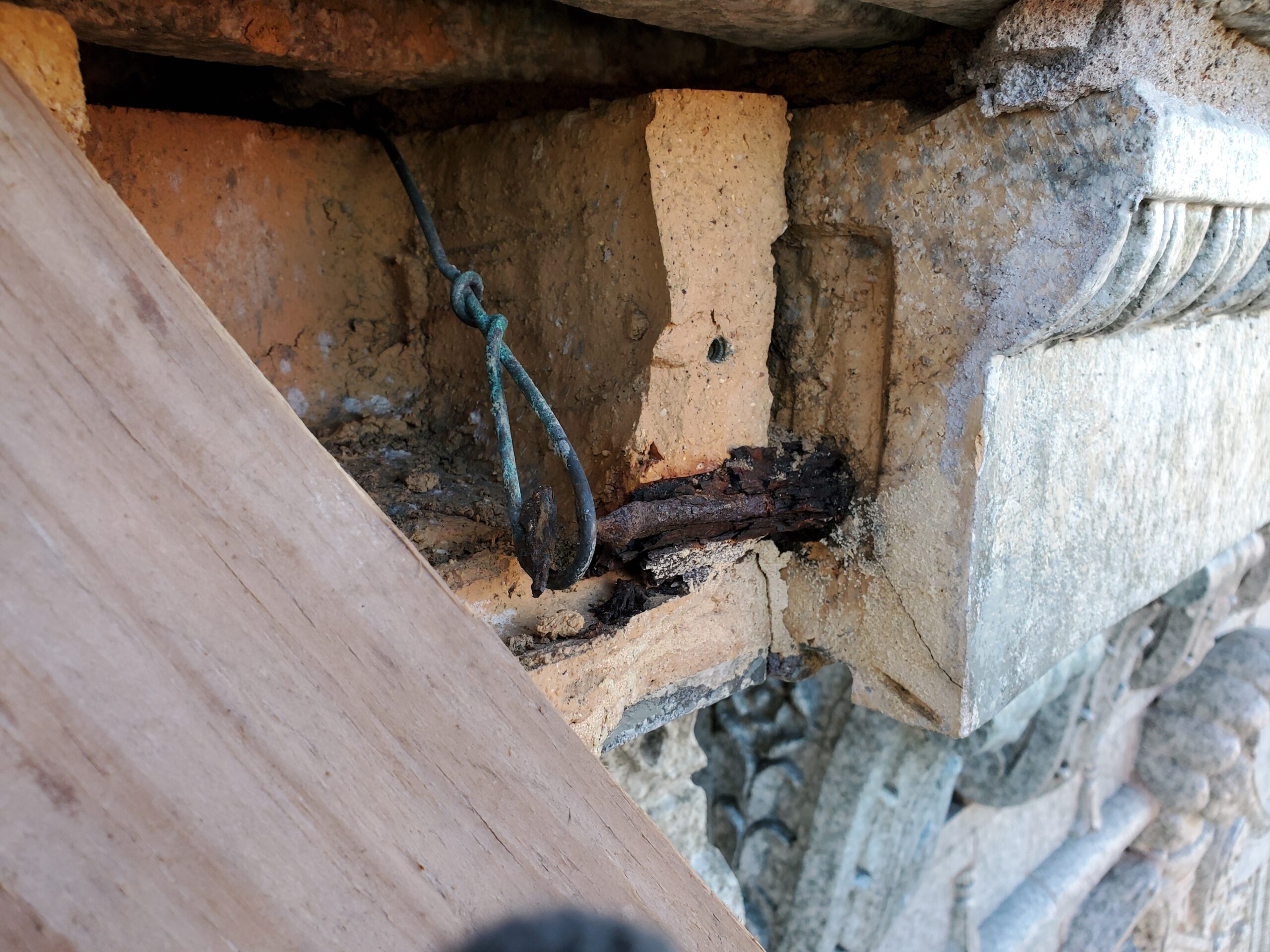 Many of the joints between the terra cotta pieces that make up the front of the Jacobson Building have eroded, leading to interior damage and cracked tiles.

Broken pieces will be replicated, a meticulous process that takes 6 months at least. The challenge is that each piece is a unique design. Simply stated, producing terra cotta pieces starts with mixing clay; then sculpting the clay by hand and/or using molds; drying the clay; glazing the pieces to achieve the desired color and finish; firing the pieces in a kiln; and finally cutting the pieces to the exact size needed.

The cornice overhanging from the roofline will be removed for installation of a new steel support system and then reassembled.

In addition to the exterior work, the contractor will repair cracks in the main interior support pillars.

Building has endured for nearly 100 years

Henry J. Harm, a former mayor of Albert Lea, commissioned the architects of Larson and McLaren of Minneapolis to design a building to replace his jewelry store that burned down in 1922. Built by Tapager Construction of Albert Lea, the new building housed the store on the first floor with apartments on three floors above. 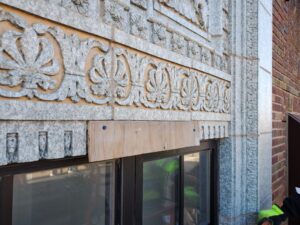 “The Freeborn Bank and Jacobson buildings are nationally recognized for their design of that period. Built in 1922, both buildings have a unique, detailed terra cotta façade. Few buildings of that time were built with such elegance and charm,” according to GLT Architects of St. Cloud, Minn., which has worked on the buildings previously.

The Jacobson Building’s front façade features highly ornamental details with Art Nouveau-style, nature-inspired design motifs around the storefront, at the window openings and spandrel panels between each level of windows, and at the prominent bracketed roof cornice.

Developing the buildings has met with some success, with the city leasing or selling some space for various businesses in recent years.

The Jacobson Building will be closed to the public during repairs, expected to take at least a year.

Albert Lea officials are confident that once the Jacobson repairs are complete, development in the form of business and residential space can resume in both buildings. In the meantime, Jacobson and its neighbor contribute to an increasing tax base downtown. In 2021 alone, there were more than two dozen events held downtown and property owners made improvements to downtown buildings that exceeded $417,000 in value.

“These types of buildings will never be built again. This is a chance to preserve this style of architecture for our community and state, to preserve a cornerstone of our history,” Boeck said.